THE LAND OF KILIMANJARO

The Serengeti National Park is one of the world’s last great wildlife refuge. This vast area of land covering 14,763 sq. kms supports the greatest remaining concentration of plain game in Africa, on a scale unparalleled anywhere else in the world. The name Serengeti comes from the Masai ‘Siringet’, meaning endless plains. The park contains an estimated three million large animals, most of which take part in a seasonal migration that is one of nature’s wonders and is the centre of the Serengeti ecosystem, roughly defined as the annual ‘wildebeest migration’ that serves as pasture for wild animals. The migration of more than 1.5 million Wildebeests accompanied by hundreds of thousands of Zebras and Gazelles help to preserve the species. Predators such as Lions, Leopards, Cheetahs, Hyenas and Crocodiles are too glutted to take advantage of all the opportunities. Vultures, marabou stocks and other eagles clear the skies to accumulate at the feast. There are some creatures living in the Kopjes. Best Time: For the migration from December to May in the South of the Park and from June to October to the Western Corridor and to the North. 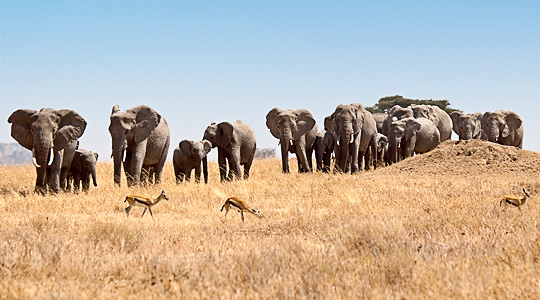 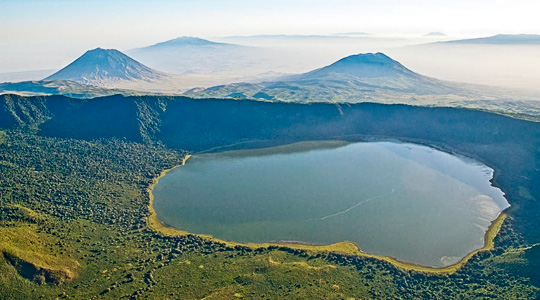 The Ngorongoro Conservation Area is a huge area with a total of 8,288 sq kms. The area includes some other small craters known as Empakai, Olmoti, together with mountains, the archaeological sites of Olduvai Gorge, rolling plains, forests, lakes, dunes and of course Ngorongoro Crater. The highest peak of the area stands at 3,600 mts above the sea level known as mount Lolmalasin. Active volcanoes of mount Oldonyo Lengai is located on the North East side of the Area, Ngorongoro Crater, the first view of it is absolute splendor. The most striking feature, the Eden of Africa, one of the wonders of the world! The Crater has an area of about 260sq Km that is 19 km across. It stands 2,286mt above the sea level, the floor lies about 610mt below the rim. The crater has a spectacular concentration of wildlife. Within the crater there is shallow Soda Lake (Magadi) and flamingos that dwell around the lake which remains dry sometimes. It is the best place to see rhinos throughout the year, the bird life is also rich and the hunting ground for lions, cheetahs and hyenas. Between the Ngorongoro and Serengeti area lies the world’s most important archaeological site the “Olduvai Gorge”. “The cradle of mankind’, where the oldest trace of men and animals were found by the Leakeys. Best Time: Whole year – rainy season in April

Within the Greatest African Rift Valley, the Lake Manyara National Park covers an area of 325 sq. kms and consists of five distinct vegetation zones with a wide range of flora. The park is famous for its tree climbing lions that often laze on the branches of acacia trees. Manyara Park is sanctuary to elusive buffalos and hippos, giraffes, impalas, zebras, troops of baboons, elephants, reedbuck, waterbuck, blue and vervet monkeys and many more. Lake Manyara itself is a magnet for large varieties of birdlife, other species can be found around its shores, including huge flocks of flamingos. The Hotels and Lodges are situated at the top of the rift walls offering comfortable accommodation and spectacular views of the Park and the Lake. The dry season is from June to September and January to February. Best time: Whole year 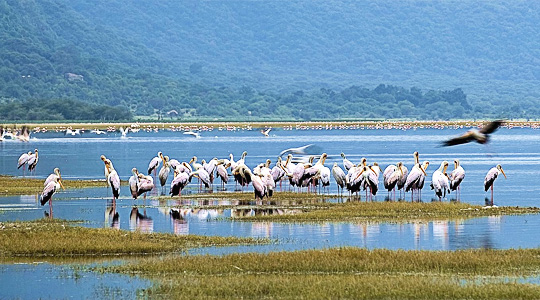 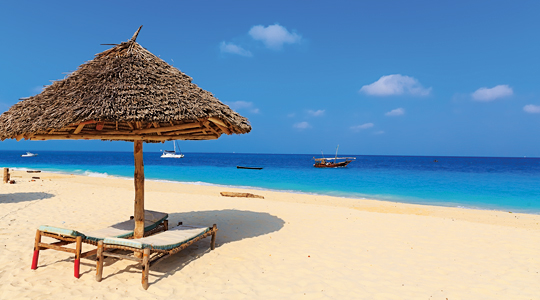 Zanzibar is located about 35 kilometers off the East Coast of Tanzania. It comprises the 1,464 square kilometers, of Unguja (also known as Zanzibar) and the island of Pemba (868 – square kilometers), which is located about 50 kilometers north of Unguja and famed for its deep-sea fishing and scuba-diving; and a number of smaller islands. Kiswahili is the main language and more than 90 per cent of the population is Muslim. Visitors should dress modestly in public places. Zanzibar is warm almost all year round with heavy rains from March to May and lesser rains during October and November. February is the hottest month with a maximum average temperature of 29 degrees Celsius, while in August the temperature falls to 21 degrees Celsius. Think of Zanzibar and images of romantic dhows with curved white sails, veiled women, ancient ruins and exotic spices, float before your eyes. Zanzibar is known throughout the world as the jewel of the Indian Ocean and has a romantic, colourful history of seafarers and explorers, of riches and tragedy, and the dark stain of slavery. Best Time: June to Mid March with the hottest months from January.

Tarangire National Park, with an area of 2600 sq. kms, situated only 120 km from Arusha, is famous for its dense wildlife population. The park offers a splendid view over the savannah, interpassed with acacia and baobab trees includes the swamps, rivers, and rock outcrops. The area is engulfed by several hills. Between June and December thousands of animals migrate from the dry Maasai steppe to Tarangire River looking for water. Among species to be seen in Tarangire are buffalo, elephant, lion, warthog, eland, the fringe-eared, and a large number of impalas and gazelles. Tarangire National Park is also famous for the tree climbing pythons and abundant bird life. Best Time to Visit: From June to February. 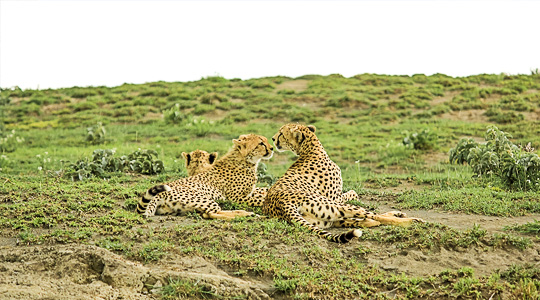 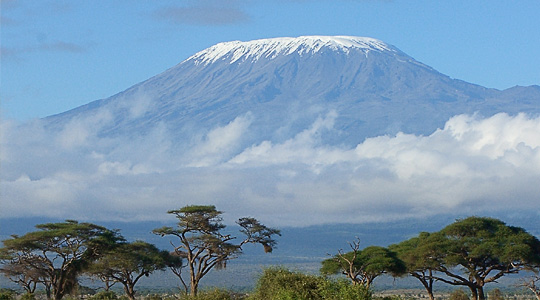 The highest in Africa just 330 kms South of Equator in Northern Tanzania. It is composed of two dormant volcanoes Mawenzi (5,149 mt.) and the permanent snow caped Kibo, the highest peak 19, 330 feet (5,895 mt). The total area of the Park is 755 sq. kms. Kilimanjaro also one of the world’s highest solitary mountain can be climbed at any time of the year except during the long rains from March to May. The ascent can be made by any normal fit person with assistance of guides and porters via Marangu route. The route usually requires 5 to 6 days. This mountain, apart from featuring breath taking landscape is also notable for its birdlife and beautiful rain forest. Those who reach Uhuru Peak, the actual summit or Gillman’s Point on the lip of the Crater will have earned their climbing certificate and their memories. There are six major Trekking Routes. Best time: Whole year except April and May rainy seasons.